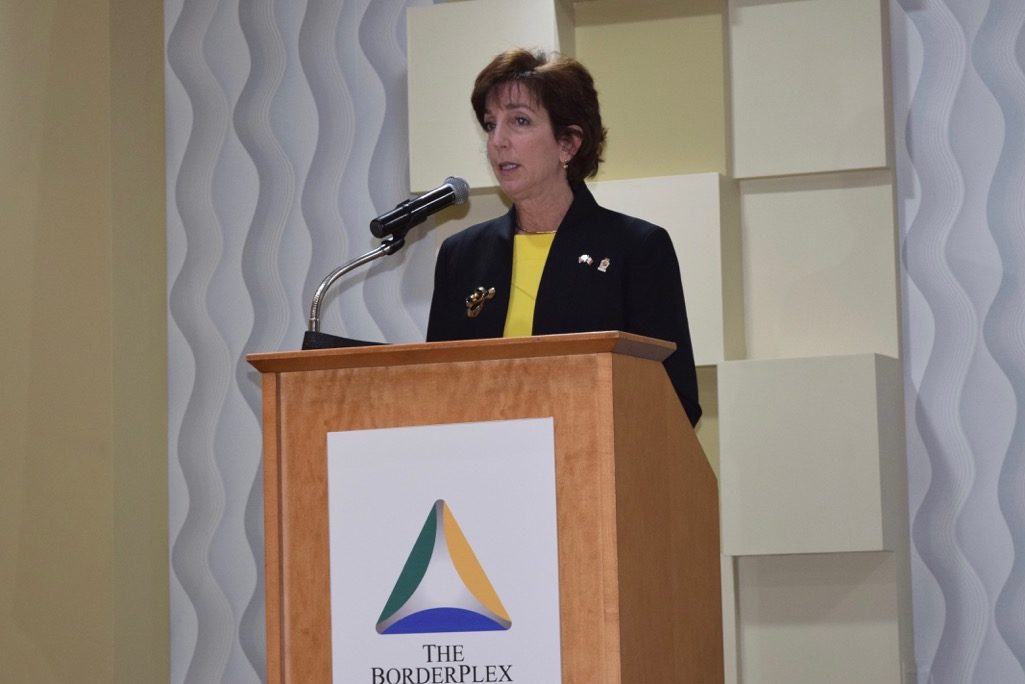 — AS PREPARED FOR DELIVERY —

Good morning.  Thank you to Rolando Pablos for graciously inviting me to share my perspective with this impressive group, which has done so much to build bridges between our two countries.  I want to especially thank Congressman Beto O’Rourke for having organized the first U.S.-Mexico Border Summit in 2015, and for his experience and guidance in this second year.  Representative O’Rourke has been a tireless advocate for the U.S.-Mexico relationship.  Thank you Congressman.

When I come to a major event like this, I always think:  What can we do to make the partnership even stronger between our two countries?  However, I have to admit that as I look at this region, I have been a witness to how it has developed over the years, and I can tell that you are on the right path.

When we talk about our economic relationship, the numbers speak for themselves.

I know you know these numbers, but they are worth repeating:   This region has more than 2.5 million inhabitants and about $85 billion in trade that passes through every year.  El Paso is the second busiest port of entry along the entire 2,000-mile U.S.-Mexico Border – a binational border that sees $1.6 billion in commerce every day.  Twenty-eight million people entered the United States through El Paso last year, either by vehicle or on foot.

There are hundreds of U.S. based companies –Honeywell, Lear, 3M, Johnson and Johnson, and GE, to name a few – whose locally-produced products support hundreds of thousands of jobs on both sides of the border.  The globally competitive Ciudad Juarez export manufacturing sector directly employs 270,000 people.  You manufacture everything from car headlights to refrigerators to Blackberry smartphones – these are all tangible manifestations of our partnership.

To take another example, let’s consider the El Paso retail sector:  Federal Reserve numbers show that about 15 percent of all retail sales in the city of El Paso come from Mexican customers, supporting companies and families in my country.

The economic project and cross-border partnerships here are truly an example for other regions to follow.  We can learn from successful manufacturers; or from the University of Texas in El Paso, which hosts more than 10 percent of all the Mexican students studying in the United States.  We can also learn from the communities of Las Cruces, El Paso, Ciudad Juarez, and the surrounding areas, which share deep, personal and familial ties and have stood together in good times and bad.

Looking at your accomplishments, I am optimistic about our shared future.

So, what can we do to strengthen collaboration and bring even greater prosperity to the region?  First of all, we in the U.S. government, and our Mexican counterparts, have a shared responsibility to ensure efficient, modern borders that can support the work you are doing.  Security is always a primary concern, but we need to make sure that our shared border continues to facilitate the efficient movement of goods and people.  The SENTRI program is one innovative way we are facilitating transit.  Trusted trader programs are another example of how we are working to speed up the flow of commerce at the border.

Our federal governments play an important role as advocates for business.  Through the High Level Economic Dialogue, the bridges and borders working group, and other fora for cooperation, we keep advancing at the very highest levels in Washington and Mexico City our shared goals for the border.  Dialogues like these have led us to new innovations at the border, such as cargo pre-inspections, the design of newer, more efficient ports of entry, and much more.

I am honored to represent the United States in Mexico.  In order to be an effective advocate, I need to understand your point of view.  I have already heard from some of you and look forward to hearing the opinions of others.  I thank you for your thoughts, and I want to let you know that I am already thinking of ways to incorporate your ideas into my conversations in Mexico City and into our binational programs.

Thank you again for the invitation to participate in this summit and get to know you and this dynamic region even better.